5 Effective Ways To Use Medical Marijuana 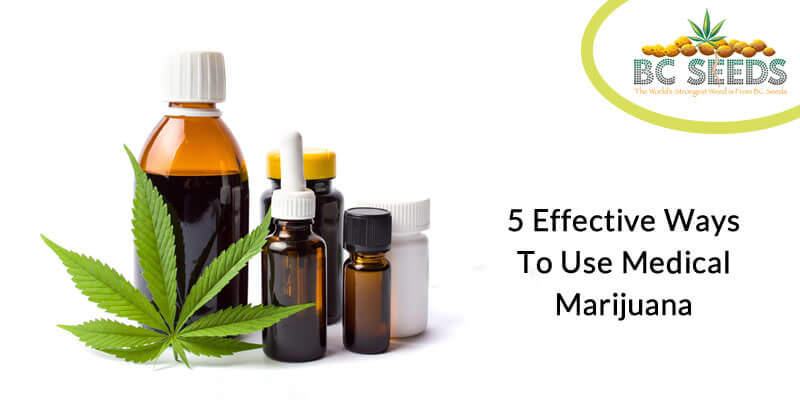 Do you know that you can still consume Medical Marijuana even though smoking is currently prohibited in the country? How you ask……

Yeah, smoking marijuana is banned, but there are national methods of taking medicinal marijuana which are legal, even the doctors prescribe those methods precisely. Let’s see what the methods of administering medical marijuana are and how patients are consuming it across the country – and how each form of treatment works.

When you inhale marijuana through smoking, the lungs absorb cannabinoids and rapidly transport them to the bloodstream. This way of inhalation has shorter effects. Israeli drug delivery company Syqe Medical, has developed 3-D Printed medical marijuana Inhalers, these inhalers are pocket-sized. 3-D inhaler is a nice method of using medical marijuana, it allows doctors to prescribe the proper dose of medical marijuana to patients.

These inhaler can control the doses and are accentuated, which means that these inhalers are able to dispense weed in a controlled way, totally smoke-free. 3-D inhalers can be loaded with 100-microgram cannabis cartridges, a caregiver interface, thermal and flow controllers, lung interfacing and wireless connectivity to clinical databases. Due to which doctors do not face any problem while prescribing the required dosage of medical cannabis for a patient.

3-D inhalation of medical marijuana relives one from acute pain, along with neurological and psychological symptoms. This method of inhalation is currently in use at Rambam Hospital in Haifa. All in all, the device is a great gadget, making consumption of marijuana a more controlled and healthy option for patients.

A marijuana gum, is under development by AXIM Biotech. This gum will help combat gastroenterological disorders like irritable bowel syndrome (IBS). Due to irritable bowel syndrome (IBS) one can experience any unexpected painful situation from stomach cramps to bloat and diarrhea. Due to the nature of the disorder, AXIM Biotech felt a dire need to introduce a practical, quick and effective delivery method, which is CanChew+. AXIM Biotech claims that the CanChew+ gum will deliver a controlled dosage of CBD effectively and rapidly that too in a highly bioavailable form.

Cannabis Science Inc. has recently developed a transdermal patch to test fibromyalgia and other nerve-pain disorders including diabetic neuropathy. At present, there are many companies offering cannabis transdermal patches. These patches contain THC and CBD, and the ratio or the dosage varies case to case depending upon the severity of ailment. Some patches are even made with terpenes. The purpose of these patches is to deliver cannabinoids through the skin and into the bloodstream.

Suppositories are another method to deliver medical marijuana, even doctors are advocating its use. Doctors claim that suppositories are more effective than smoking cannabis or eating edibles, as, suppositories provide better and quick absorption of marijuana than any other delivery method. In this method, cannabinoids are absorbed into the bloodstream via the mucous membranes in the rectum.

Moreover, suppositories are gaining popularity, and are easily available in places where marijuana for medical purposes is in use.

Another San Diego based company lately introduced CannaNeb, first-of-its-kind cannabis nebulizer. Company claims that it is the cleanest, purest, and least harmful method of administering medical marijuana to the patient. The CannaNeb comes in a kit, which includes six therapeutic-grade cannabinoid-extract blends, providing effective treatment in medical condition of any nature. The product is made of glass and metal. The best part is, this nebulizer administers odorless medication, and is portable and cost effective.

Mr. BC Seeds
Mr. BC Seeds is an over educated old school hippy who has been involved in the cannabis industry since the 1970's. He is one of the most experienced marijuana breeders in Canada if not the entire world. He was the first to use the most advanced breeding techniques in 2008 to create 42 of the world's strongest cannabis strains. He has been writing in-depth articles about cannabis in Canada for decades and looks forward to continue bringing you cutting edge cannabis strains for the decades to come. Mr. BC Seeds uses a "pen name" because he still travels the world collecting cannabis strains and continues researching cannabis in laboratories of non-legalized countries.
Posted in General and tagged bc big bud
4 Potent Techniques For Sprouting Cannabis Seeds
4 Reasons To Stop Puffing Synthetic Marijuana