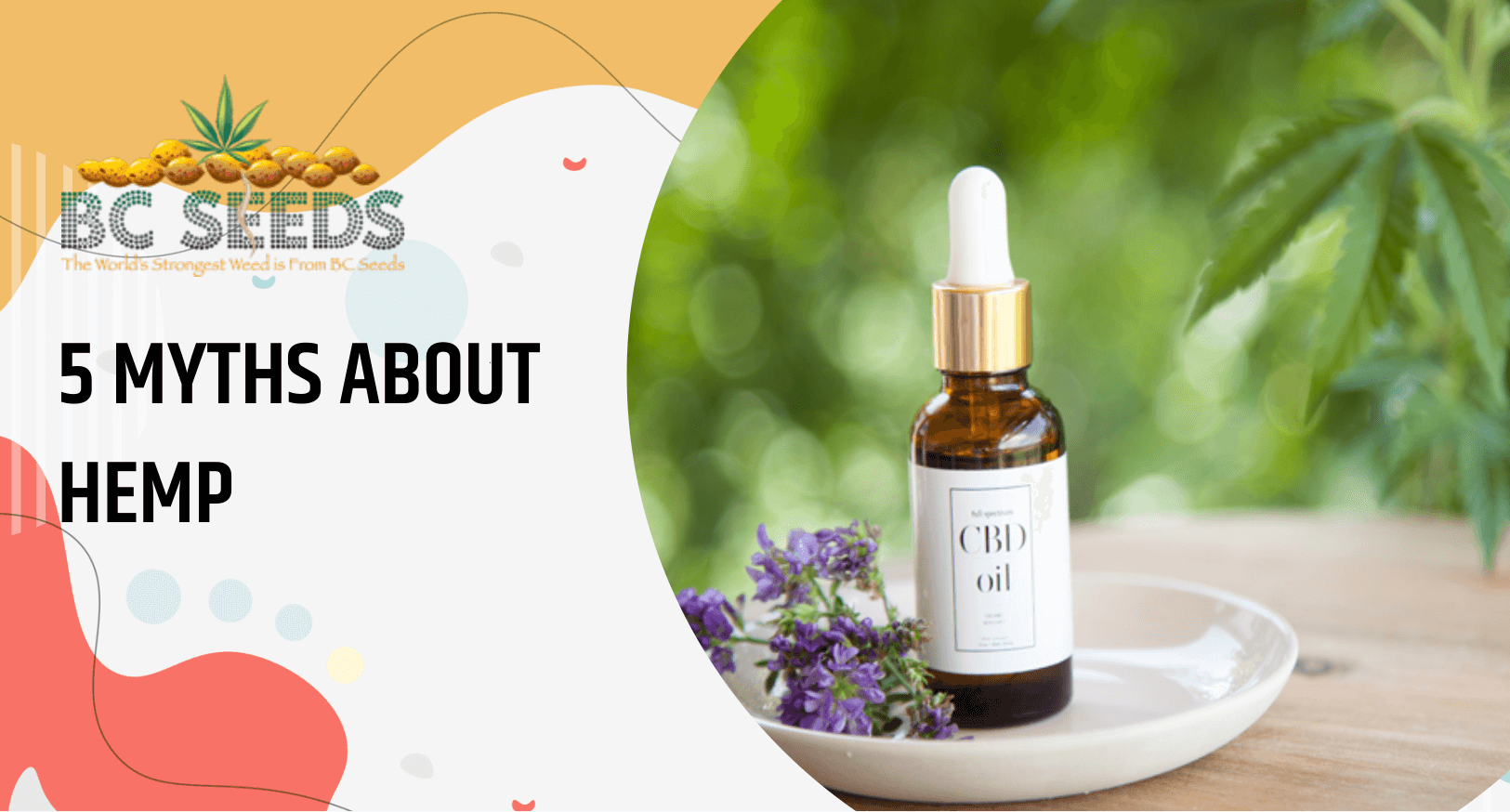 For generations, hemp fibres have been used to make garments, textiles, papers, weaves, and even home decor items. Furthermore, hemp has nutrients that are beneficial to the body, making it a popular health food as well as a vital ingredient in lotions and soaps. Hemp is now being grown as a commercial plant to meet the ever-increasing demand for CBD. Despite the fact that hemp’s popularity has surged in recent years, its use is still fraught with controversy. Here are five of the most frequent marijuana myths.

Hemp, like marijuana, is a member of the Cannabis sativa plant family. Hemp, like marijuana, has hundreds of various strains/cultivars, each with a varying level of THC content and CBD content. This is why, while looking for hemp-derived CBD products, it’s important to learn as much as possible about hemp’s origins.

Hemp and marijuana are both cannabis cultivars that arose as a result of selective breeding. Although they have a similar appearance and scent, they are structurally and chemically distinct. The most notable distinction between the two is the level of tetrahydrocannabinol (THC). THC is the chemical that causes users to become high; hemp contains almost no levels of THC, but marijuana contains anywhere from 10% to 30%. Marijuana, in its most basic form, is cannabis that produces a mind-altering high and leaves users feeling euphoric and bewildered. Hemp, on the other hand, has no such intoxicating properties.

There’s a myth going around that hemp doesn’t take much water to grow and doesn’t require pesticides. While this would imply that it is the easiest crop to raise in the world, this is not correct. Hemp plants, in reality, require a lot of rain, especially in the first six weeks following germination. As a result, the plant’s reputation as a good dry-land crop (meaning it can be produced without irrigation) is incorrect. However, as long as hemp receives adequate rainfall during the first six weeks, it can withstand long periods of drought. However, when hydrated, it grows taller and thicker, which is why irrigation is still suggested. There is some truth to the notion that hemp does not require pesticides to grow. Insects find it more difficult to enter these plants since they naturally grow tall and close together. This means that the plant does not necessitate the application of as many pesticides as other outdoor crops.

There is a widespread myth that you cannot smoke hemp and reap its health advantages. In reality, smoking hemp is a centuries-old practice that many people still enjoy today. You can smoke hemp in the same way that you would any other type of cannabis. After all, hemp flower buds are essentially identical to marijuana buds that are dried and smoked. Of course, smoking is not the healthiest method to bring hemp into your life, but it is quick-acting, and inhalation provides almost instantaneous CBD exposure.

Truly, hemp is an extremely adaptable plant. It has a wide range of applications, from textiles and building to nutrition and agriculture. Because hemp can be farmed to produce sustainable and eco-friendly alternatives to daily things like cotton and plastics, it’s simple to conclude that hemp is the solution to all of the world’s issues. In truth, this assumption is partially incorrect, as hemp has its own set of agriculture (and even environmental) issues. Growing hemp in place of other crops, for example, will still result in deforestation and the clearing of land for cultivation. Growing hemp instead of cotton, for example, would be a great step forwards in some regions, but replacing all of our present methods with hemp-based alternatives is not feasible.

Mr. BC Seeds
Mr. BC Seeds is an over educated old school hippy who has been involved in the cannabis industry since the 1970's. He is one of the most experienced marijuana breeders in Canada if not the entire world. He was the first to use the most advanced breeding techniques in 2008 to create 42 of the world's strongest cannabis strains. He has been writing in-depth articles about cannabis in Canada for decades and looks forward to continue bringing you cutting edge cannabis strains for the decades to come. Mr. BC Seeds uses a "pen name" because he still travels the world collecting cannabis strains and continues researching cannabis in laboratories of non-legalized countries.
Posted in General
HOW TO TALK TO YOUR DOCTOR ABOUT USING CBD OIL
5 UNUSUAL WAYS TO CONSUME CBD