Government drug testing toilet sewage since at least 2015 with some data as early as 2008. Privacy is hard enough as it was with the NSA listening and seeing everything you do or say. They do this through your smart phones and smart TV’s. The internet has no boundries and CCTV camera’s everywhere.

The government is testing your raw sewage and calculating precisely how many doses of cocaine were taken. Precisely how much you took on Christmas day. We have leaked data that shows the Government is drug testing raw sewage in neighborhoods and even in Prisons. That’s only a small part of a possibly much larger big picture. 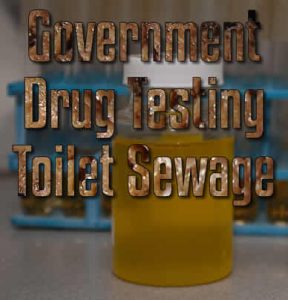 Is It a Good Thing For The Government To Be Doing?

Government drug testing toilet sewage can help them pinpoint neighborhoods with a higher drug usage and add extra law enforment to make those areas safer. They could even possibly spot neighborhoods with a rising trend in drug use and put there efforts into prevention through education so the trend reverses.

Is It a Bad Thing For The Government To Be Doing?

Imagine a not too distant future with lots of robots and artificial intelligence. No more lawyers, trials. Just a streamlined judicial system run by robot police. Say it’s your Birthday and you take some hard drugs. The govertment installed a drug sewage electronic kit to your pipes without your knowledge. The drug testing of your excretions commences as soon as you flush your toilet. The robot police get your positive test results sent to them wirelessly from the cloud and are programmed to come to your house and arrest you, and find you guilty without a trial and within seconds you’re sentenced and on your way to jail. Now imagine it happening in Thailand or some place where they have the death penalty. The Robot Police come find you and execute you right then and there.

Mr. BC Seeds
Mr. BC Seeds is an over educated old school hippy who has been involved in the cannabis industry since the 1970's. He is one of the most experienced marijuana breeders in Canada if not the entire world. He was the first to use the most advanced breeding techniques in 2008 to create 42 of the world's strongest cannabis strains. He has been writing in-depth articles about cannabis in Canada for decades and looks forward to continue bringing you cutting edge cannabis strains for the decades to come. Mr. BC Seeds uses a "pen name" because he still travels the world collecting cannabis strains and continues researching cannabis in laboratories of non-legalized countries.
Posted in General
Grow Weed Without Your Neighbours Knowing
Canada’s Black Market From the Shadows Into the Light