What Are the Key Differences of THC & CBD Strain?
What Types of Marijuana Buds Are Popular to Stoners?

How Efficient Is Medical Marijuana to treat Drug Addiction? 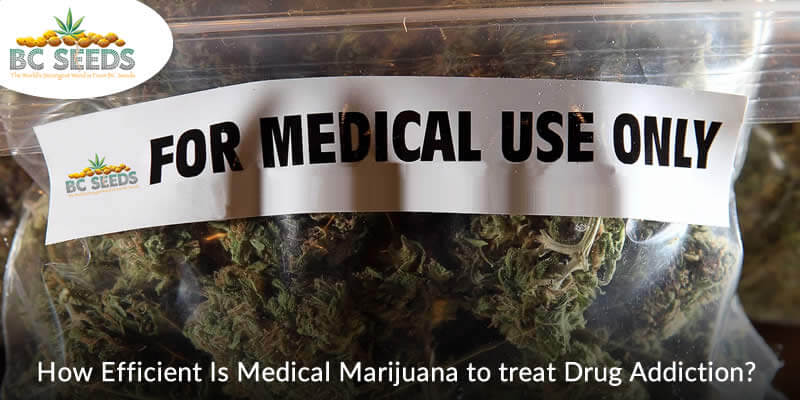 According to Wikipedia, medical marijuana, or medical cannabis, is cannabis that is recommended by doctors for their patients. It can be administered through a variety of methods such as lozenges, capsules, dermal patches, cannabis edibles, oral sprays, tinctures, and smoking dried buds.

Although the use of marijuana as medicine has not been rigorously tested due to restrictions and other government regulations,

Also, cannabinoids have been recommended for anorexia, arthritis, migraine and glaucoma. As earlier mentioned, the use of marijuana as medicine has not been rigorously tested so the world is still waiting to know if medical marijuana has more beneficial effects. However, in recent years, there have been growing curiosity about the effectiveness of medical marijuana to treat drug addiction. Experts are exploring cannabinoids to treat addiction to drugs like cocaine and opioids.

There are divergent views about the use of medical marijuana to treat drug addictions. Some experts believe it is quite effective for such treatment while other experts do not favor marijuana as a treatment for drug addiction. Joe Schrank, program director and founder of High Sobriety believe medical marijuana help people stop drug addiction. In an interview with CNN, he says his Los Angeles-based treatment center uses medicinal cannabis as a detox and maintenance protocol for people who have more severe addictions, although it’s effectiveness is not scientifically proven. According to Schrank, this is a harm-reduction theory, which is a strategy for treating addiction that accepts incomplete sobriety.

Mr. BC Seeds
Mr. BC Seeds is an over educated old school hippy who has been involved in the cannabis industry since the 1970's. He is one of the most experienced marijuana breeders in Canada if not the entire world. He was the first to use the most advanced breeding techniques in 2008 to create 42 of the world's strongest cannabis strains. He has been writing in-depth articles about cannabis in Canada for decades and looks forward to continue bringing you cutting edge cannabis strains for the decades to come. Mr. BC Seeds uses a "pen name" because he still travels the world collecting cannabis strains and continues researching cannabis in laboratories of non-legalized countries.
Posted in General and tagged British Columbia bud
What Are the Key Differences of THC & CBD Strain?
What Types of Marijuana Buds Are Popular to Stoners?