All New White Widow is our most popular and potent white widow strain. Everyone has heard about this world famous cannabis and we offer the best white widow strain available in the world. White Widow is a faily short indica-dominant strain that looks mostly sativa because of her leaves. Her high starts of relaxing like an Indica that takes off a few minutes later like most soaring Sativa’s.

We had a really great white widow strain and now we’ve improved her strain so much, she’s called All New White Widow. She’s way higher in THC with way bigger yields and about 5 Times More Potent Than Our Previous White Widow and its the best White Widow Strain you will find anywhere guaranteed!

All New White Widow is a Crystal Producing Plant Factory

The crystal formations on the leaves and buds aren’t just mere eye candy. Their dense hairs produce one of the finest quality highs you could ever experience to date. A few tokes of White Widow and you’ll be sent into a floating utopia. A light and airy high bursting with energy, White Widow is a classic, psychedelic sativa strain not to be missed.

When to Harvest White Widow

She’ll be coated in crystals in 8 weeks but don’t make the mistake of harvesting her too early. A true White Widow will finish at 10 weeks (70 Days) and the fast production happens right in that last few days, so be patient and grow as much THC as possible.

White Widow’s father comes from a super resinous Kush strain that was bred in the local mountains of Kerala, India. Mr. BC was in the area and hunting for strains when he came across a mountain man smoking the finest charas made from his own families private plot of IBL Kush. After sharing the best Charas he ever smoked,  they used hand gestures in combination with paper and pencil, and Mr. BC knew the man wanted to show his crop and sell more to the foreigner. Mr. BC found out that this amazing Kush comes from a small patch of pure Kush landrace bred for high THC specifically. It has been maintained by a family for many generations.

Because they have very little land, they had no choice but to make the plants growing on their small plot the healthiest as possible. They earned thier living exporting hashish made from their Kush plants. But competition is fierce and they need to earn as much income as possible from this one small plot of land. So the family of 12 worked the field from sun-up until sun-down. They would keep the garden weed free (the bad weeds) and even pick off the insects by hand. Needing the harvest to be highly resinous to make enough money to feed their family for the soon approaching the winter. They had the nicest and most cared for garden of any Kush strain in the world and they weren’t scared to show it off to foriegners. Her genetics were procured as  seed and some more charas for the long journey back to British Columbia.

White Widow’s comes from a very unstable pure brazilian sativa that taste like Mango’s. On her own, White Widow’s mothers entices a very clean, energetic and long lasting buzz. The hairs on her buds are rosé in color and sometime orange. They’re sativa and skinny like a fox tail yet they do produce copious amounts of THC, especially the Mother Manga Rosa we chose to cross with our highly resinous Kush.

It was unknown at the time, but their off-spring created the multiple award winning hybrid White Widow. The world’s most well-known strain and our best selling strain back from 1990’s thru untill 2004. She’s still a top 5 seller even today and the best choice for anyone whom wishes to grow the world’s original and most potent White Widow Strain.

Our all new extreme White Widow version  grows indoors just as well as she does outdoor. She doesn’t get crazy bushy and you’ll find only a few side-branches.

48 Reviews for for All New White Widow 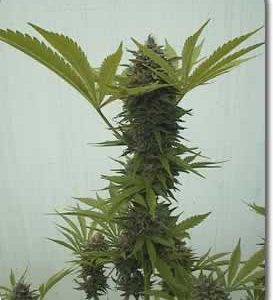