You have been smoking Weed Wrong: Here is a Complete Guide to Smoke Weed Right Way.
The origin of “420” 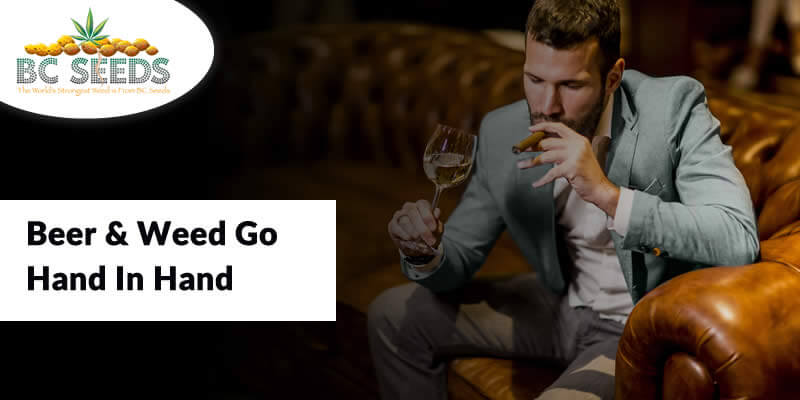 Many studies are done to find out whether the two beer and weed go hand in hand or not, and if they can be taken together then what are the significant effects of beer and weed together on human brain. However, a lot of people enjoy beer along with weed, but still the two are not same and possibly their effects are also different on human brains.

Well, nothing can be said on the basis of assumptions, here are some significant effects of both on an individual:

First thing first, before knowing any effect of two on a human brain it is very important to know that weed and beer are two psychoactive substances, but still share no similarity with one another. According to the researches weed acts upon ones brain’s cannabinoid receptors, arousing ardent cognitive effects such as paranoia, attention deficit, a distorted sense of time, and many more. Whereas, beer weaken or impair the nervous system with significant corollary to motor skills, for an instance a drunkard find walking in a straight line really difficult, as the impact of beer on a person’s brain lead to a disturbed walking. Also, the quantity at which the beer or weed is consumed matters and the effect are multiplied accordingly.

Now, imagine a situation where both the two are taken together, of course the effects of two will be combined and the consequences which one will have to go through will combined effects of both the two. Moreover, in some cases the effects can be more than expected, like the effects considerably are compounded. For an instance, people who smoke a joint along with few beers (more than one) will have twice as much weed in their blood than those who didn’t drink beer at all. Also, one more very important point here is these effects will be visible only when you drink beer first, and then smoke a joint.

This, however happens because beer will open up blood vessels in the gastrointestinal tract helping the weed to be absorbed more efficiently, thereby affecting brain to behave in a certain way.

On the other hand, people who smoke weed first and drink beer after that, the high effects will be comparatively lesser. However, the fact remains, if a person will drink too much of beer before lighting the first joint, it is highly likely that he/she will start to suffer from nausea, puking, and other immediate effects.

Also, studies shows that smoking weed first and beer after that will result in less alcohol in the bloodstream, because weed will lower the effects of beer in the gastrointestinal tract.

Well, not only the combination of two intensify the high, but also the lows such as impaired judgment and increased heart rate. Also, taking weed with beer will make it difficult for one to even puke. Puking, however, provides a defense mechanism for the body when a person is highly intoxicated with beer. And if the person won’t be able to puke in severe case, he may even die. Also, it is not a god combination for people who have heart issues.

Hence, it can be said that beer and weed can go hand in hand if only taken in a proper quantity and not in large quantity. Because, if the combination is taken in large quantity it may even lead to one’s death, which is not good to consume, and should be avoided completely.

Mr. BC Seeds
Mr. BC Seeds is an over educated old school hippy who has been involved in the cannabis industry since the 1970's. He is one of the most experienced marijuana breeders in Canada if not the entire world. He was the first to use the most advanced breeding techniques in 2008 to create 42 of the world's strongest cannabis strains. He has been writing in-depth articles about cannabis in Canada for decades and looks forward to continue bringing you cutting edge cannabis strains for the decades to come. Mr. BC Seeds uses a "pen name" because he still travels the world collecting cannabis strains and continues researching cannabis in laboratories of non-legalized countries.
Posted in General and tagged Annihilation Bud
You have been smoking Weed Wrong: Here is a Complete Guide to Smoke Weed Right Way.
The origin of “420”