You have been smoking Weed Wrong: Here is a Complete Guide to Smoke Weed Right Way. 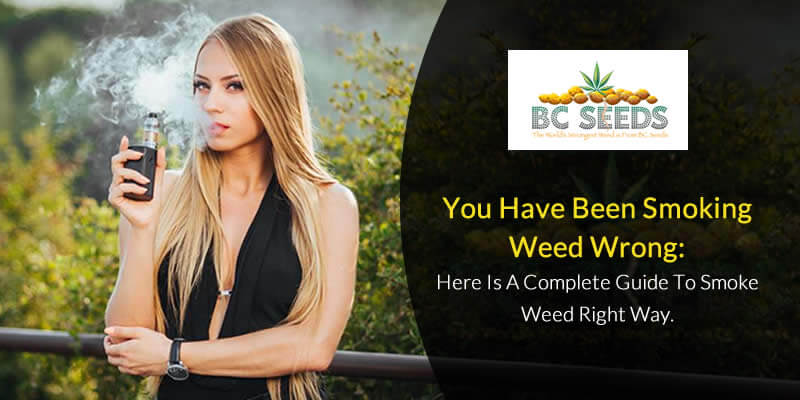 Weed percolates into the blood system in just few milliseconds and impacts brain. So, smoking weed in a wrong way is a real waste of product and there is no point spending money on the product.

Yes, I mean it, if you are sucking it in a big toke and holding it for a while you are not only wasting the product, but also shorting yourself on the experience along with huge wastage of your money. There are people who will hold the joint like cigarette or like cigar between index and middle fingers, and puff it away and flick ashes here and there. And, will never be able to experience the real fun of smoking weed. They are never able to reach that point for which every smoker smoke weed.

Because it is a greatest mistake to smoke the joint like a cigar, as, cigars are not inhaled at all. However, inhale is done in cigarette but the methods are not similar. And there are several other wrong things which people do, while they smoke weed.

Here are the right ways to smoke weed

Well, to be very frank different people have different ways to smoke weeds. So, there is no one way to inhale weeds. But, you have to focus on what suits you the best. Cannabis works through the lungs, so they need to stay there for some time.

The purpose of the lungs is to take oxygen in and release carbon dioxide out and the process is called “gas exchange.” The whole respiratory process is controlled by the diaphragm, it is a large muscle under the lungs. As we inhale, the diaphragm contracts and create a vacuum so that the inhaled air can get fill. And, when we exhale, there is a reverse process.

Our brain is such that it indicates its systems to resist foreign substances. But, because cannabis affects the human brain and it has a place in the brain’s workings, the brain doesn’t resist cannabis. But the point here is, no matter how much our brain likes cannabis, the working or the process of our lungs can’t handle weeds for more than it wants, if your intake is too big, it will just flow into the trachea, nose, and mouth.

So, smoking weed is a process that is done more conscientiously than smoking a cigarette or cigar. Hence, smoking weed properly in a right way takes time and you need to give yourself that time for perfecting the technique.

Here are some steps which you need to follow and achieve the perfection to smoke weed:

Mr. BC Seeds
Mr. BC Seeds is an over educated old school hippy who has been involved in the cannabis industry since the 1970's. He is one of the most experienced marijuana breeders in Canada if not the entire world. He was the first to use the most advanced breeding techniques in 2008 to create 42 of the world's strongest cannabis strains. He has been writing in-depth articles about cannabis in Canada for decades and looks forward to continue bringing you cutting edge cannabis strains for the decades to come. Mr. BC Seeds uses a "pen name" because he still travels the world collecting cannabis strains and continues researching cannabis in laboratories of non-legalized countries.
Posted in General and tagged Annihilation Bud
5 Tips to Grow a Better Marijuana Plant
Beer & Weed go Hand in Hand