Home Police Raids are on the decrease, but you should still be aware if you have marijuana in your home. What to do if the Police come knocking? A man’s home is his castle, as the saying goes, but in many states there are limitations on what you can do in your home, what plants you can grow, and how you can enjoy them. The Constitution protects us against unreasonable searches and seizures, which means among other things that the police can’t just barge into your home and start nosing around. If you live in a state that does not allow marijuana possession or use, there are still some things you need to know about marijuana in the home and how to stay on the right side of the law if a cop knocks on your door.

Police can’t enter without a warrant.

But they can enter with probable cause.

Police don’t have to have a warrant if they have probable cause to believe that a crime is being committed. There are several things that can give probable cause: Here’s what cannot give probable cause: This last point is very important: if your neighbors complain that they smell weed, an officer cannot perform a home police raids and search your home unless they have a warrant or unless they smell the weed themselves when they come and knock on your door. That said, it is almost impossible to prove that an officer did not smell weed, or at least that they did not in good faith believe that they smelled weed, and therefore if an officer says he or she smells marijuana there’s not much you can do to prevent a search. 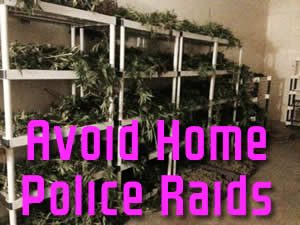 Always say you don’t consent to a search.

Home Police raids can change your life. The burden of proof is on the police to prove that a search was constitutional. If a judge finds the search unconstitutional, nothing the police find in the home can be used against you in court.

If police do come into your home against your will, stay silent and ask for a lawyer. Trust us, when they say that anything you say can and will be used against you in court, they’re not kidding.

Keep your stuff out of sight.

Anything that can be seen from any public-access area is considered to be out in the open. So if you have a pretty little planter pot of pot in your window, make sure it’s a window that looks out onto your backyard, that you have a good privacy fence, and that nobody can see over your privacy fence into your window. Better yet, just use a grow lamp and keep your blinds closed.

Watch out for smells.

If police can smell weed through your front door, or if they catch a whiff when you crack the door open to see who is knocking, that’s probable cause. Keep your enjoyment to an interior room where the smell won’t reach the outdoors, and if you suspect that you might have a lingering odor clinging to your clothes, just don’t answer the door.

Know your rights and don’t be intimidated.

Many people end up consenting to searches even if they have something to hide, simply because they are intimidated and don’t know their rights. Police use intimidation tactics to get people to do what they say. It’s counterintuitive to think that a law enforcement officer would use illegal tactics, but it happens. Police departments get funding based on the tickets they write, the fines they give people, and the drug busts they do. There’s not a lot of incentive for them to tell you your rights or to give you an easy out. It’s up to you to protect yourself and protect your rights under the constitution. Just because marijuana isn’t legal in your state, that doesn’t mean that you have to consent to unconstitutional searches or let police in your house to find your stash.

Home Police raids are best when avoided. Never speak a word about your grow. Never play loud music and be a bad neighbor. Always keep the odors emmited from your house to zero and never have any home visitors. Use some common sense. It can sometimes be advantageous to grow fewer plants with higher THC to stay under the radar. Forever Buds is a single plant that produces buds of 50 plants all year round. And remember we do not encourage anyone to act in conflict with their locals laws. All information is for entertainment purposes only.

Mr. BC Seeds
Mr. BC Seeds is an over educated old school hippy who has been involved in the cannabis industry since the 1970's. He is one of the most experienced marijuana breeders in Canada if not the entire world. He was the first to use the most advanced breeding techniques in 2008 to create 42 of the world's strongest cannabis strains. He has been writing in-depth articles about cannabis in Canada for decades and looks forward to continue bringing you cutting edge cannabis strains for the decades to come. Mr. BC Seeds uses a "pen name" because he still travels the world collecting cannabis strains and continues researching cannabis in laboratories of non-legalized countries.
Posted in News and tagged Home Police Raids
War on Drugs Game Changer
Pot for pets