Where can you store Poppy Seeds?
Is shroom tea good or bad for your health?

The vivid description of snowball strain

When one hears the name “snowball strain”, the general public would feel that we are talking about playing in the snow with a snowball. But users of snowball strain, know for a fact that it is something different that lends them a sense of relaxation and calmness.

Let us first understand a bit about the snowball indica dominate hybrid variety which is native to Colorado.  The earthy aromas are something that lends the right feel.  There are native gardeners who don’t have any difficulty growing this native crop. The right flowering time for the cannabis plant is around fifty to seventy-five days. 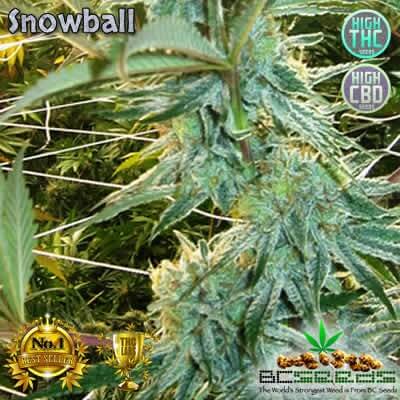 Marijuana lovers love the light citrus scents, creamy note and of course the bright terpenes that fill the atmosphere. The snowball strain is a perfect cross between the white and the Chem 4 OG S1 cannabis strains.

So what exactly does one look out in a snowball strain?  With an earthy and light citrus scent to boast about, it lends the right relaxation and a mild excitement that is truly heavenly.

On the other hand, Snowball kush gives the right high when you are just relaxing. With some soothing music to go with it, it is truly magical.  Get into the mood of just feeling light.  If you have someone close to you, then you are definitely going to feel happier. Get into a heightened mood of euphoria, relaxation, happiness and drift off to some sound and healing sleep.  This ought to calm your anxious nerves and rest assured no bad dreams.

Let us now see what is something that users are not happy about? It could be anything from having a dry mouth and some hangover of the strain.  You surely would want to barter this for the strain.

That being said, the taste is great and awesome.  With subtle earthy notes in the smell, you are going to enjoy the citrus taste for sure. One is definitely going to relish the euphoria associated with the strain.

So where does Snowall derive its name from? It is obvious from the snowball flowers? The cured buds appear as if they have snow all over it.  The levels of THC in Snowball is about 22 percent which is but obvious from the appearance of the snowball looking trichomes, not to mention that it’s also used as night time for relaxation and sleepiness effects; thanks to the calming effect it has. It has a potential of deep relaxation, thanks to the indica strain genetics. It has a substantial terpene profile which consists of caryophyllene which is the only terpene that has interaction with CB2 receptors.  Since it has the sedation properties, these have been used by people who are hyperactive and who deal with a lot of anxiety attacks. It’s a mild sedative and so it helps to curb any form of paranoia or anxiety. It also aids in pain relief thanks to the calming properties.  Thus, snowball strain is also very successful in the medical field and being used widely right now. It grows great in cold clmate like Northern Canada and the Colorado mountains.

Having touched on the positives, let us also check out a few side effects. This means you could not overdo the snowball strain as it could lead to losing focus and concentration.  So if you intend driving or would want to take up tasks which call for the need to focus, you obviously are going to land into trouble.  If you really want to know what snowball strain is all about, you need to experience it for sure.  The exclusive taste and flavour is going to be quite tempting and you need to try it just for the fun of it.

So can we conclude that the flavour of snowball weed is something that is worth giving a try.

Mr. BC Seeds
Mr. BC Seeds is an over educated old school hippy who has been involved in the cannabis industry since the 1970's. He is one of the most experienced marijuana breeders in Canada if not the entire world. He was the first to use the most advanced breeding techniques in 2008 to create 42 of the world's strongest cannabis strains. He has been writing in-depth articles about cannabis in Canada for decades and looks forward to continue bringing you cutting edge cannabis strains for the decades to come. Mr. BC Seeds uses a "pen name" because he still travels the world collecting cannabis strains and continues researching cannabis in laboratories of non-legalized countries.
Posted in General
Where can you store Poppy Seeds?
Is shroom tea good or bad for your health?