Who really discovered THC?
Why does cannabis affect its users differently?

What is the difference between male and female cannabis? 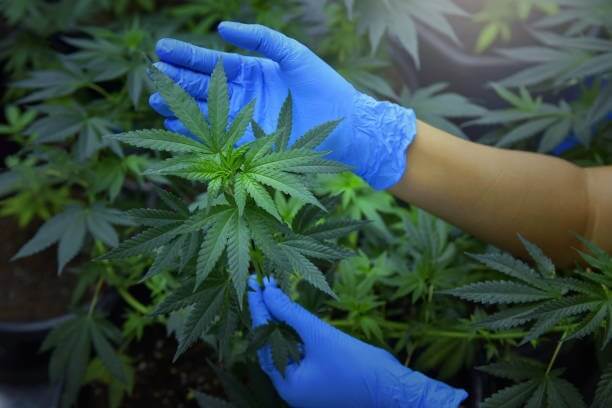 If you are not too familiar with cannabis culture, you may think that all plants grow the same. In a way, this is true, because they all belong to the same species. But once biological sex comes into play, things get complicated. So let’s take a closer look at the differences between male and female cannabis plants.

HOW TO IDENTIFY FEMALE CANNABIS PLANTS

Once we have a better understanding of why male and female cannabis plants exist, the next step is to identify the sex of each plant. Let’s start with the female plants that will give us those delicious, smokable flowers.

It is difficult to tell the difference right from the start, because female plants only reveal themselves after about 3 to 6 weeks of growth, when small hairs appear on the nodes of the stem. These are called pistils and serve as ‘tentacles’ on the calyx, which is the most important female sexual organ of cannabis plants.

This explanation also allows us to describe in detail how cannabis plants reproduce exactly. As the plants mature, the males develop pollen sacs that eventually open and pass the pollen on neighbouring female plants. The pistils of the females capture the pollen and send the genetic information to the calyx. The energy they used (or would use) to produce resin is now used to produce seeds.

As for the female plant, her only job was to capture the pollen, so she doesn’t bother to produce other trichomes later. This change in energy means that you can harvest seeds instead of flowers. What if there are no male plants around? As soon as a female plant enters the flowering phase and there is no pollen, it will produce larger flowers on the inflorescences in the hope of coming into contact with the pollen. In the end, she may not like to catch pollen, but she will win your heart with a high yield of resinous flowers.

HOW TO IDENTIFY MALE CANNABIS PLANTS

So, if female cannabis plants can be identified by their stigmas that capture pollen, what factor characterises a cannabis plant as male? We have already suggested this: the main sign to look for is the development of pollen sacs. Male preflora behave exactly like their female counterparts: They appear in the pre-flowering phase and look like small green bags that rest on the nodes of the shoot.

They seem harmless at first, but if you want to get the maximum yield from your female plants, pollen bags can be a disaster for your crop. However, they are beneficial for growing cannabis plants. As mentioned earlier, female plants take pollen as a sign that they no longer need to develop trichomes and instead use all their energy to produce seeds that contain parts of the male plant’s genetics.

WHAT CAN YOU DO WITH MALE CANNABIS PLANTS?

But what should happen now that you have removed the male plants from the grow room? So far you have spent all this time cultivating and caring for them. So it would be a shame to throw them all away. Fortunately, there are surprisingly easy ways to use male cannabis plants outside of cultivation.

Perhaps you have an appetite for edible products? The tiny amount of THC contained in the pollen can be used to make delicious little dishes, while the leaves can be made into a nice salad. The fibres can also be used to make ropes or cords and serve as a cheap but effective alternative to conventional materials.

SHOULD MALE OR FEMALE CANNABIS PLANTS BE GROWN?

This raises the question: should male or female cannabis plants be cultivated or both? It depends on what you want to obtain. If you only need them as companion plants and as a source of fibre and you don’t want to look after the flowers, you can take advantage of some male plants. If you are trying to grow new strains and experiment with different genetic combinations, you will need both male and female plants. There is no need to ask specific questions about this, because a packet of ordinary cannabis seeds contains, on average, both biological sexes in almost the same ratio.

However, if your main aim is to get as much high quality bud as possible, make sure that you only grow female plants. In this case, you can always buy regular seeds, but then – as already mentioned – you will have to identify all males and remove them from your plantation.

You can also spend a bit more money on feminized seeds. There is a 99% probability that these will develop exclusively into female plants. This way you can grow beautiful buds without any worries!

Mr. BC Seeds
Mr. BC Seeds is an over educated old school hippy who has been involved in the cannabis industry since the 1970's. He is one of the most experienced marijuana breeders in Canada if not the entire world. He was the first to use the most advanced breeding techniques in 2008 to create 42 of the world's strongest cannabis strains. He has been writing in-depth articles about cannabis in Canada for decades and looks forward to continue bringing you cutting edge cannabis strains for the decades to come. Mr. BC Seeds uses a "pen name" because he still travels the world collecting cannabis strains and continues researching cannabis in laboratories of non-legalized countries.
Posted in General
Who really discovered THC?
Why does cannabis affect its users differently?